We have two type of current:

– One is called Direct Current (DC)

– The other is called Alternating Current (AC)

for your radio. The current flows in one direction.

AC is what you get from the wall outlet in your home.

The current first flows one way, then reverses and

flows the other way.

Electric current is the flow of electrons (or any charge carrier)

The more electrons that flow, the higher the current.

Current is measured in amperes, amps (A), named for the French

In electronics we usually use milliamps (mA) and microamps (uA).

What Makes the Electrons Flow?

In order for the electrons to flow, there has to be a

potential difference between where the electron is

and where it is going to flow.

Potential difference is measured in volts (V), named for the

Most measurements are in volts, but we also use millivolts (mV)

two points in a circuit.

If one point is at 20 volts and another at 10 volts, the potential

Whenever electrons flow through a wire, or any conductor,

the composition of the wire resists the flow of the

electrons. This is called resistance.

Resistance is measured in Ohms, abbreviated as Omega (?).

The ohm is named for Georg Ohm, a German physicist and

We also speak of resistance in thousands or millions of ohms

There are three types of materials, with respect to resistance

– Semiconductors – resistivity can be varied

The resistance varies with the length, area, temperature and

resistivity of the material.

For a wire, the longer it is, the higher the resistance

The larger the area (bigger wire), the lower the resistance

l is the length of the conductor

? is the resistivity of the conductor

A is the area of the conductor

E is measured in volts

I is measured in amps

R is measured in ohms

Remember, we need a potential difference to make amps flow.

So if we put a voltage across a resistance, a current will flow.

Some use V for volts

A = BC is an equation that means that some number A

is equal to the product of B and C.

To find C, we can divide both sides of the equation

Resistors are marked with a color code so we can identify them.

Resistors use to be made of compressed carbon. These

-Inexpensive to make, but tend to change value with age

and can be noisy.

-Nearly always go up in value with age. Sometimes way up!

Newer resistors are either carbon film or metal film. The metal

film resistors are very stable and are quiet.

There are also metal oxide resistors. These are usually the higher

for RF due to inductance. Act like coils of wire.

In addition to resistance, resistors are also specified as to the wattage they can dissipate and their tolerance.

Power resistors can have wattages of several hundred

Best to operate a resistor at no more than ½ of its power rating.

Most resistors are ±5 % of the expected resistance value.

Power Dissipation in a Resistor

What Can We Do With Ohm’s Law?

If we know the voltage and resistance, we can calculate the current.

If we know the current and resistance, we can calculate the voltage.

If we know the voltage and the current, we can calculate the

If the voltage across the resistors is 3 volts,

the current through the resistors will be 0.001 A

This is the equation we use to calculate

the resistance of two resistors in parallel.

If the two resistors have the same value,

With two equal resistors in parallel, the total is R/2

With ten equal resistors in parallel, the total is R/10

Why Use Series and Parallel Resistors?

Sometimes we need a resistance value we don’t have.

We can combine resistors to “make” the value we need

Sometimes we need to make a resistor of higher wattage.

Power is spread over several resistors.

Ohms. Placed in series you would have 2 k

The power source, the switch and the three bulbs are

connected in series. Opening the switch disconnects the

power from the three bulbs.

If one bulb burns out, none of the bulbs will light.

The battery and the switch are connected in series with the

three bulbs that are connected in parallel.

When the switch is closed, each bulb will have the battery

If one of the bulbs burns out, the others will still light.

A voltage divider is used to reduce a higher voltage

to a lower voltage.

It is simply two or more resistors connected in series.

The current through each resistor is equal.

The voltage drop across the resistors may be the same

(both resistors have same resistance or different (each

Resistor has a different resistance).

IR1 = IR2 because the resistors

Since the resistors are in series, both resistors have

0.005 amps passing through them

IR1 = IR2 because the resistors

Most DVMs have an input resistance of 10 megohms.

-The readout is digital

Many VOMs have input resistances less than 10k – 100 k ohms.

-The readout uses an analog meter

Assume the voltmeter you are using to measure Eout has an

Most digital volt meters have an input resistance of 10 megohms.

using a DVM with an input resistance of 10 megohms.

So the input resistance of your voltmeter will affect the measured

Measurement with an oscilloscope will also affect the voltage

measured. Many oscilloscopes have input resistance of 1 megohm.

Cautions When Using a DVM

Always double check that the DVM is switched to the proper

Function (volts, ohms or amps). Also AC or DC, with volts and amps.

Trying to measure voltage in the ohms position may damage the

Trying to measure voltage in the amps position may damage

the DVM and the circuit you are measuring.

but normally it shouldn’t hurt anything.

may damage the DVM.

Cautions When Using a DVM

Never try to measure ohms when the circuit is powered

or the voltage hasn’t decayed to zero.

Always make sure that your test leads are in good shape

and the insulation isn’t cracked.

Check your test leads by measuring the resistance when

they are connected together. It should measure very close

Using a VOM and a DVM

Measure several resistors using both a VOM and a DVM.

The VOM will require you to adjust the zero setting after

you change the scale.

Notice how precisely you can measure the resistors with

Are the resistors within the specified tolerance?

Notice what happens if you hold the leads of the resistor

Using a VOM and a DVM

in series with the power supply.

-Measure the voltage with a DVM and a VOM

In series with a power supply.

-Measure the voltage with a DVM and a VOM

Is there a difference in the voltage you measure? 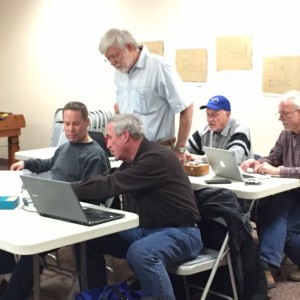 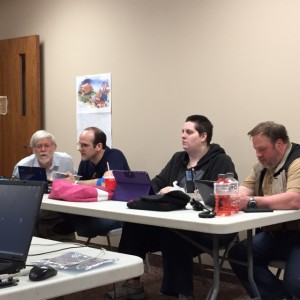 We had a fun Technical Tuesday meeting earlier this week.  Hopefully everyone feels comfortable using the Arduino IDE and has had some time to play with the “Blink” example program.  I suggest changing the Blink code and seeing if it will compile and run.  You can change delay times and program different blink sequences.  If you don’t have the Arduino board yet, you can still modify the program and see if it will verify correctly.  You won’t know if it will run the way you want it to run, but at least you’ll know that it is valid code.
What you have learned with the Blink example is the basic format of a C++ program, how to assign a port as an output port (we used pin 13 which already has an LED attached to it on the board), how to drive the port high and low and how to use the “Delay” command.
I suggested that you modify the program to flash out a simple Morse word, such as HI or SOS.  The most straight forward way to do this is to simply copy as many high/low sequences as you need and put delay times between the blinks.  Some of you did this during the session, while others may still be working on it.  There are other ways to do this that are more efficient, but for now try it with copying and pasting the lines in the example.
At our next session we’ll rewrite the code to use fewer lines and to make it run faster.  If you want to work ahead, look up the “While” command.  There are other ways to do this too, but for now let’s use the “While” command.  If we have enough time, we might also start assigning pins as inputs and using them to control the blinking LED(s).  We’ll also go over how to add additional LEDs to the Arduino, how to select the correct series resistor for the LEDs and how to use a resistor and switch to pull a port either high or low.
Since we will be adding more LEDs to our Arduino and also adding switches, resistors and LEDs, you will need a prototype board and some jumper wires.  You’ll also need some 1 k and 10 k resistors, and some LEDs.  I’ll try to have some along for you to use if you don’t have any.  I’ll also provide switches to those attending the sessions.
Here is the link to a vendor selling the jumper wires and a prototype board.  It also includes a 3.3 volt power supply that is useful if you’ll be working with some of the Arduino accessories, like WiFi.  The cost is $6.78, including shipping.
http://www.ebay.com/itm/Mini-Prototype-board-Electronic-deck-65pcs-Breadboard-Wire-cable-Power-Supply-/191396768257?pt=LH_DefaultDomain_0&hash=item2c9022ea01
If you have the prototype board, this URL is for just the jumpers.  The cost is $3.98, including shipping.
http://www.ebay.com/itm/40pcs-20cm-2-54mm-Male-to-Female-Dupont-Wire-Jumper-Cable-for-Arduino-Breadboard-/321432975900?pt=LH_DefaultDomain_0&hash=item4ad6e5fa1c
Here is a link to the resistors.  The cost is $2.50/100, including shipping.
http://www.ebay.com/itm/100-x-Resistor-Carbon-Film-1K-OHM-1-4W-5-Free-Shipping-From-USA-/191304175909?pt=LH_DefaultDomain_0&hash=item2c8a9e1125
http://www.ebay.com/itm/100-x-Resistor-Carbon-Film-10K-OHM-1-4W-5-Free-Shipping-From-USA-/171437099592?pt=LH_DefaultDomain_0&hash=item27ea728a48
Here’s a site for LEDs.  The cost is $8.79/100, including shipping.
http://www.ebay.com/itm/100x-Lot-Blue-Yellow-White-Green-Red-5mm-Round-Top-Diffused-LED-Light-Bulb-USA-/161264855170?pt=LH_DefaultDomain_0&hash=item258c226882
All of these vendors are in the US, so anything you order should arrive within a week.  It  would be good if those attending the sessions could coordinate amongst themselves so that everyone doesn’t buy all the parts.  100 resistors (of each of the two values) and 100 LEDs will be plenty for the whole class.
Let me know if you have any questions.