Note:  Please contact Ed Gray (W0SD) regarding any historical PDARC info that you might have.  We would love to capture more history with this article!

They met the second Tuesday night of the month usually in the basement of the USD Law Bldg. in Vermillion, though occasionally in other towns.  The president in 1954 was Arlo “ANDY” Anderson-EUJ, Vice President is R.E. Macy-GDE, Sec.-TGR. is Ed Heins-ZVV, Chief Operator is Roy Jorgensen-MMQ, Custodian is Don Kahler, Publicity Manager is Lester Lauritzen-SCT.

Membership is scattered in a wide area of Southeastern South Dakota with members in Iowa and Nebraska as well.  Also one is in the Navy at Tr. Island Calif.

Carl Lehman, W0KVV was a paid up member at the time he joined the “Silent Keys” early in 1954 and in his honor his wife, Mrs. Lois Lehman was been made a Lifetime Honorary member of the PDARC.

On May 24, 1953 R.E. Macy (GDE) received the clubs station license with the call W0OJY.  So far club operation was on equipment borrowed from members as available when needed.  The main operating activity as a club was annual participation in the ARRL Field Day.

Other club activities included: equipment auctions, code and theory classes, group participation in amateur activities in the region, getting QSL cards printed and printing the 1954 Who’s Who in SD Hamdom directory by the PDARC.

The PDARC published a monthly bulletin midway between meetings called “The PRAIRE DOG ‘s S-s-s BARKS”  This is pronounced “sparks” and is something of a play on words combining “bark”  for the “DOG” of the club name with “spark” as in electricity and radio. S-barks carried articles touching upon all phases of amateur radio as available, news of clubs, nets and individual amateurs, ARRL Official Bulletins, letters, comments, a Swap department and paid commercial advertising.

This bulletin went free to club members and such complimentary subscriptions as ARRL officials, new managers, etc.  A free introductory subscription was sent to hams and prospects in the club area and exchanges with other such bulletins as desired.  A slowly growing list of subscribers around the state and region as the bulletin becomes know was making it more than merely a club paper.  It was becoming a source of news and information for a wider area.  Contributions of news and articles for use in the bulletin was welcomed and encouraged.  Deadline for receipt of copy was the last Tuesday of each month.  The subscription price was 75 cents per year post paid.  It was to be mailed to the editor, Lester R. Lauritzen (SCT) RFD RT 3, Centerville, South Dakota or to any club member.  Two cent stamps were perfectly acceptable. (This article was published in the 1954 Who’s Who in South Dakota Hamdom produced by the PDARC) 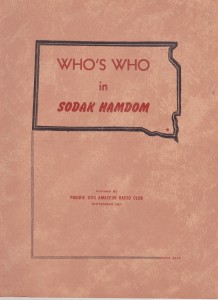 The Prairie Dog Amateur Radio Club was incorporated as a non-profit corporation under the laws of South Dakota in February of 1956.

In 1976 the PDARC sponsored a SD QSO party for the nations bi-centennial.  W0SD Ed Gray of Salem received the first place home made wood plaque from the PDARC.  It was in the shape of the state of South Dakota.  He made 788 contacts in 84 sections for 66,192 points.  It was awarded by President Gary Knutson K0ZZ. 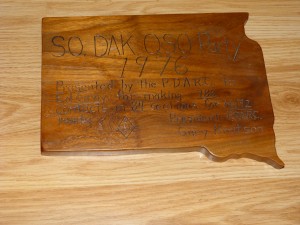 Turkey Ridge was put on the air through ground work by Ed Gray W0SD in conjunction with the Mitchell ARC and Prairie Dog ARC.  Permission for the site was given by WA0QLP on his land where a nearly 200 foot tower was installed. It was not long until the responsibility for this site was completely taken over by the PDARC which continued until 2008. The PDARC with lots of building material donations from Del K0GDS (silent Key) built a repeater housing structure at the base of the tower.  W0SD believes it was 1978?   The PDARC turned Turkey Ridge over to SDARC in 2008.

Report from KJ0M Jim from Menno::

Field Day was the ONLY club activity that ever took place when I was active. We used to meet for monthly meetings at the Akeley Science Center in Vermillion where Chris, AC0M had his office or at the WNAX studio, the office of K0YJF, on alternate months. That building has since burned down. Some of the guys that attended that I remember, were: Chris, AC0M; Gary, K0ZZ; Ed Nelson, K0YJF; Roy, W0MMQ; WB0VEV and his wife WB0VEU; K0AAR from Sioux City; W0WH from Tyndall; Clyde, N0BPC; Bill, K0WIU; there were others but they escape me after 30+ years.

The Field Days that I was active in were all held at the Tabor Recreation Area south of Tabor in the primitive camping park there. We’d set up a small 20’ tower with a tribander and some dipoles hanging off of it. 2 stations would operate, one CW and one phone. Gary, Chris and I would generally man the CW station. I don’t remember anything about scores. I don’t think we ever scored anything too big. Our site was right down on Lewis & Clark Lake with lots of hills around us, so don’t think it was the best, HI. We had a big trailer mounted 6 cylinder, army surplus generator that made lots of noise, but was good for lots of power. We’d set up Saturday AM, start at noon and operate until Sunday noon, then tear down.

I don’t know anything about .85 since that was up and running when I got my first 2 meter rig in 1976. The Vermillion machine went live after I got inactive, which was in 1983 or so, so it was sometime after that.